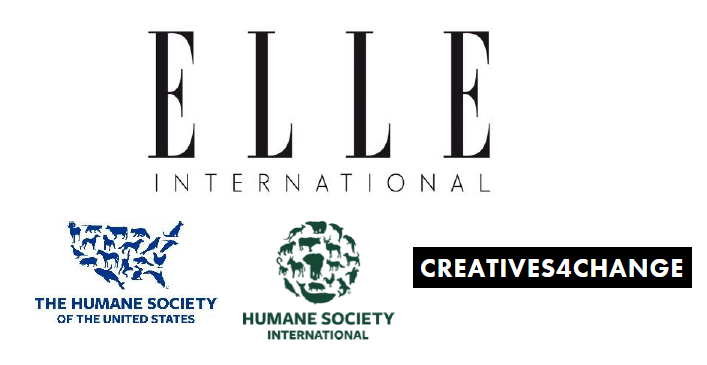 ELLE magazine is proud to announce that it has committed to ending the promotion of animal fur in its pages and online.
The commitment follows dialogue between ELLE brand owner, Lagardère Group, the Humane Society of the United States, Humane Society International and Creatives4Change. The announcement was made today at Business of Fashion’s 2021 VOICES event in London.
ELLE created a charter to disallow editorial content that promotes animal fur on its pages, websites and social media. This includes no animal fur in editorials, press images, runway images and street style images. The charter, which in alignment with the Fur Free Alliance’s definition of fur, no longer allows the depiction of animal fur in any advertisements in its pages and online.

The ELLE network that will be impacted by this announcement includes:

According to Constance Benqué, CEO Lagardère News and CEO ELLE International: “Societal engagement has always been one of the key pillars of the ELLE brand. The world has changed and the end of the use of fur is aligned with the course of History. We hope that, with this commitment, ELLE will open the path for other media to disallow fur promotion, all around the globe, and promote a fur-free future.”

According to Valéria Bessolo LLopiz, SVP and international director of ELLE: “For many years, ELLE has been engaged towards environment, sustainability and ecology through regular features or special green issues. The presence of animal fur in our pages and on our digital media is no longer in line with our values, nor our readers’. It is time for ELLE to make a statement on this matter, a statement that reflects our attention to the critical issues of protecting and caring for the environment and animals, rejecting animal cruelty. It is also an opportunity for ELLE to increase awareness for animal welfare, bolster the demand for sustainable and innovative alternatives, and foster a more humane fashion industry.”

Alexi Lubomirski, fashion photographer and founder of Creatives for Change, says: “Since its inception, ELLE magazine has always been a leading light in fashion, synonymous with a freshness, unencumbered by the weight of tradition and formality. Because of this strength, ELLE was said to ‘not so much reflect fashion as decree it.’ It is this creative power to inspire, that allows ELLE to make broad steps in shaping the hearts and minds of its readers for a more evolved and aware future for all.”

PJ Smith, director of fashion policy for the HSUS and HSI, adds: “We celebrate ELLE for taking a stand against the cruel fur trade and look forward to other fashion magazines following their lead. This announcement will ignite positive change throughout the entire fashion industry and has the potential to save countless animals from a life of suffering and a cruel death. ELLE’s leadership will also drive innovation for more sustainable and humane alternatives.”

About the Humane Society of the United States
Founded in 1954, the Humane Society of the United States and its affiliates around the globe fight the big fights to end suffering for all animals. Together with millions of supporters, the HSUS takes on puppy mills, factory farms, trophy hunts, animal testing and other cruel industries, and together with its affiliates, rescues and provides direct care for over 100,000 animals every year. The HSUS works on reforming corporate policy, improving and enforcing laws and elevating public awareness on animal issues. More at humanesociety.org.
About Humane Society International
With a presence in more than 50 countries, Humane Society International works around the globe to promote the human-animal bond, rescue and protect dogs and cats, improve farm animal welfare, protect wildlife, promote animal-free testing and research, respond to natural disasters and confront cruelty to animals in all of its forms. Learn more about our work at hsi.org. Follow HSI on Twitter, Facebook and Instagram.
About Creatives4Change
Creatives4Change is an initiative by fashion photographer Alexi Lubomirski to make the fashion and entertainment industry a little more compassionate, ethical and moral by asking creatives to say no to using fur, feathers and exotic skins in their projects and jobs. https://www.alexilubomirski.com/creatives-4-change